Veterans give tours on USS Iowa 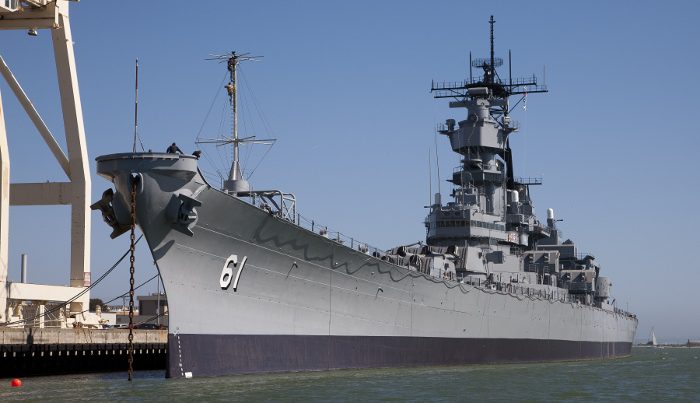 The USS Iowa, America’s first ship of its kind, commissioned in 1943, and the last American battleship to see warfare. She carried FDR across the Atlantic Ocean during WWII, and nearly 60 years later she is docked in San Pedro as a museum. On regular days, history buffs can embark on a self-guided tour of the battleship. But special events include access to some areas typically not open to tour groups, as well as Q&A sessions with Navy veterans.

The next event takes place on April 1. Atlas Obscura are hosting A Night on the Battleship, an evening tour and sleepover on the USS Iowa. The overnight excursion, the first of its kind for civilians. A limited number of tickets are on sale now for $125.

Cub Scout troupes and youth groups are able to do the battleship sleepover event from time to time as well. More information is available at their website – pacificbattleship.com

Aside from being given a guided tour by a Navy veteran, including the brig, the bridge and other areas on the ship that usually aren’t open to the public, one of the best parts of the tour is the Q&A session with retired Navy veterans who served on the USS Iowa or another Iowa class battleships, such as the USS Missouri. Access to the on board museum and gift shop are also available.

Battleship IOWA is the West Coast’s only Battleship open to the public. Operated by the nonprofit Pacific Battleship Center (PBC), the IOWA opened on July 7, 2012 as an interactive naval museum at the L.A. Waterfront. It is dedicated to “Celebrating the American Spirit” through the preservation and interpretation of the Battleship IOWA. By sharing the accomplishments and sacrifices of American patriots and engaging visitors in unique and exciting ways PBC bring the ship to life by connecting the past with the future.