VA office stacked 37,000 files on cabinets after running out of storage

Paul Sullivan is executive director of Veterans for Common Sense, an advocacy group that works on behalf of veterans' issues. 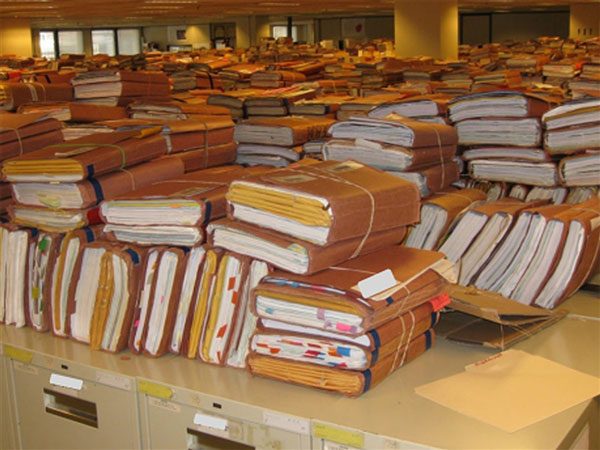 I wish I knew seven years ago what I know now about obtaining VA benefits for a loved one. Having worked in Healthcare my entire career I felt sure that I could wade through the maze of the VA bureaucracy. How wrong I was!

Seven years later my family and I still do not have a positive outcome with the VA for spousal benefits for our now 92 year old mother. I only wish I would have known to contact American Veterans Aid to handle the entire matter years earlier as now we are on our own with still no resolution and with no VA spousal benefits. At this late age there is a chance now our mother will never see those hard earned benefits from our father’s years of service.

Wishing you the very best regards,

Hope this helps someone else.

Here is the situation. I, along with my four sisters and one brother, have been trying for two years to get VA benefits for our 92 year old father who served his country in Europe during World War II. He was there for 4 years, eventually landing on Omaha Beach after the invasion.

He is severely disabled, being legally blind, wheel chair bound, suffering from neuropathy, congestive heart failure and a myriad of other ailments. He needs 24 hour care for all his needs, including hygiene. We had him in an assisted living facility for about 6 months, but when the VA did not respond to our requests for financial aid, we were forced to bring him back home. With his income he is only able to afford a caretaker for about 5 hours a day. The other time my four sisters and myself take turns caring for him. I live 600 miles away and travel back and forth every two weeks. We are all in our 60's and have health issues ourselves.

We have completed all of the paper work several times and each time it is submitted to the VA they come back and say they don't have everything they need. We are all college educated and we know that we have completed the forms accurately and completely. The clerks processing our claim even admit they have made mistakes and closed the claim twice--both times due to their incompetence.

We are at our wits' end with the VA. My father may be physically disabled, but his mind is sharp most of the time and he cannot understand why his country cannot help him out after the sacrifice he made during the war. It is causing him severe depression. He feels abandoned by his country. The doctor said that his heart is getting weaker and he may not last much longer. I cannot bare the thought of him dying knowing that he could not get the benefits that he is entitled to.

I have just returned home after a month with him. I am now in pain myself after having lifted him in and out of bed to his wheelchair. We really do need to get him some professional care if only we could get the VA benefits to pay for it.

Note: 3 weeks after she wrote this letter, her father passed away – never getting his benefit.

My husband & I applied for VA aid & attendance benefits for my father-in-law. We applied in June of 2011 (yes...15 months ago). Long story short, the paperwork was sent to the wrong office and it sat until this past summer [2012].

We have now contacted our county VA office who helped us get the paperwork to the right place. It has been at least 6 months since the paperwork was forwarded to the correct place. We have been assured that everything has been sent correctly - all paperwork, documents, receipts, etc.

My father in law has Parkinson's, mild dementia and a few other health problems. My husband is his full-time caretaker. My father-in-law does not drive. We make all his meals, take care of his house keeping & laundry, medicine, all outdoor yard work, etc. He lives by himself but he has fallen 4 times within the last 6 weeks. It is getting to the point where we need to make a decision.

We were told the checks should start in December [2012]. We called the office last week to make sure this was still the case and now they are saying March [2013]. We were told it is still in the waiting period and no one has contacted us.

Get pre-qualified for the Aid & Attendance Benefit

American Veterans Aid is a private company and is not affiliated with the Veterans Administration or any government organization or agency. Our services are provided for a reasonable fee.