This Day In Military History: March 26, 1945 The Island Of IWO JIMA Is Declared Secured. 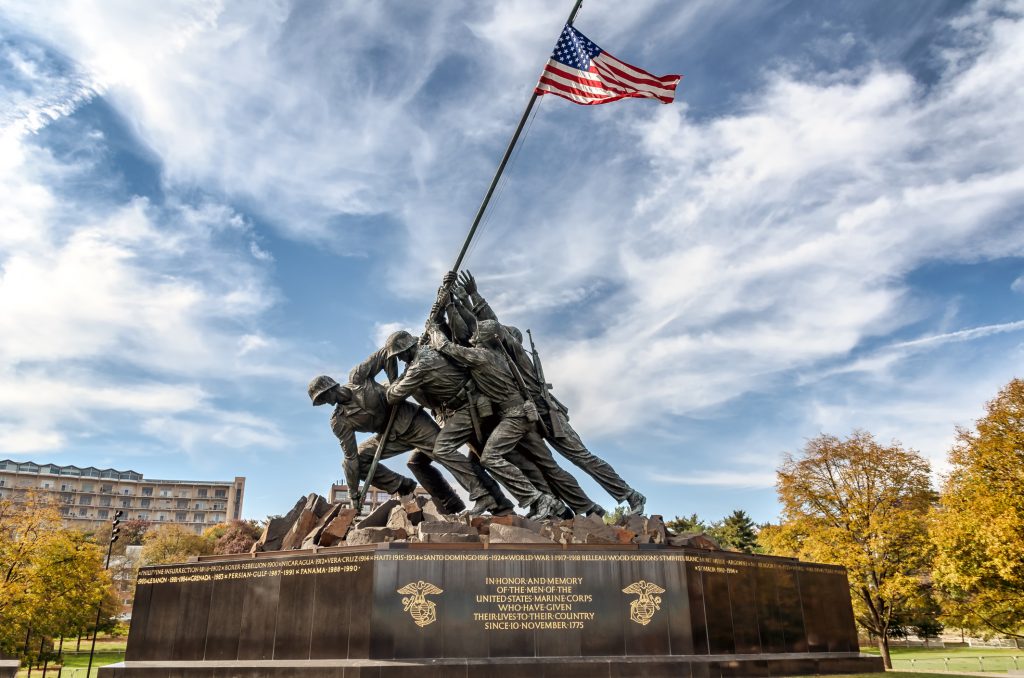 Looking At The The Battle From Different Angles

Most people, especially “baby-boomers” and the generations beyond, have heard of the battle of Iwo Jima and can relate that it was primarily a Marine battle in the South Pacific in WWII and there was a famous photograph taken when they raised the American flag.   Sometimes history can blur reality or lessen the blow of what really happened.  However, we as American citizens should take the time to remember, to study and to cherish the hardships that those before us endured.   The Battle of Anzio, Guadalcanal, The Battle of the Bulge, Pearl Harbor, D-Day and in this case the Battle of Iwo Jima are just a few of the major battles of WWII that play a major role in modern American history.  In this article, we shall take a slightly different view of Iwo Jima… that of details.  To learn more about this battle waged from February 18 to March 26th, 1945, there are many great articles found on the web and in films.  Most notably “The Pacific” a mini-series that aired on HBO and the Clint Eastwood films “Flags Of Our Fathers” and “Letters From Iwo Jima”.

THE PHOTOGRAPH: Many associate the battle of Iwo Jima from the iconic Joe Rosenthal photograph taken on February 23rd, 1945.  When the U.S. flag was raised on Mount Suribachi, many assume it signified victory, but in reality it was just the beginning of the battle.   The beach landings began on February 19th and the flag was hoisted after four days of intense fighting on the highest mountain on the island.  Expecting heavy fighting, U.S. Marines were surprised that the Japanese resistance was light and securing the summit was accomplished fairly quickly.  Most of the Japanese forces had taken refuge in the elaborate tunnel network on the island.

The first flag to go up was tied to a water pipe found in the wreckage atop the mountain and was the first foreign flag to fly on Japanese soil. This was a smaller flag than the one seen in the photograph.   James Forrestal, then the Secretary of the Navy, had just landed on the beach and wanted that flag as a souvenir, but Colonel Johnson, the Commander of the 2nd Battalion 28th Marines, was of the opinion that the flag belonged to them.  So he sent Pfc. Rene Gagnon up Suribachi with a new, larger flag to replace the smaller one.  So Gagnon, Sergeant Michael Strank, Corporal Harlon Block, Private First Class Franklin Sousley, Private First Class Ira Hayes and who was thought to be, Navy corpsman John Bradley found a sturdier piece of pipe, tied the new flag to it and raised it in the blustery South Pacific wind. And the famous photograph was snapped.  Three of the six men in the photograph were killed in action just a few days later.  For years afterwards, there was controversy about who the actual sixth man in the photo really was.  In 2016, the U.S. Marine Corps after lengthy research and review determined that John Bradley was most likely a flag raiser of the first flag, but was misidentified in the famous photo and that the actual flag raiser was Private First Class Harold Schultz of Detroit.

CASUALTIES:  The victory of Iwo Jima came at a horrible price.  There were 26,000 U.S. casualties with 6,800 dead.  Of the 21,000 (+ estimated) Japanese forces entrenched on the island, roughly 18,000(+) died in battle or committed suicide.  Though the actual death ratio was three (3) Japanese soldiers to every (1) American, Iwo Jima is the only U.S. Marine battle where the American casualties (killed in action and wounded) were overall greater than the Japanese.

The 133rd NCHB, Seabees were involved the initial beach landings where they proved their mettle on the front line and in construction capabilities under extreme circumstances. The Iwo Jima landing brought about the highest casualty rate for a single battle in Seabee history.

There were no civilian casualties in the battle of Iwo Jima as all civilian inhabitants were evacuated prior to the invasion.

THE JAPANESE FORCES:  There were roughly 22,000 Japanese soldiers on Iwo Jima.  After intense shelling from Navy ships, the island was scorched, but unknown to the landing forces, very few Japanese had perished during the artillery onslaught.  Long suspecting that Iwo Jima would be a major target as it was only 750 miles from mainland Japan, a maze of tunnels, natural caves, camouflaged bombproofs and bunkers were built and the Japanese had “dug in”…solid.   In charge of the Japanese defense of the island was General Tadamichi Kuribayashi, a shrewd strategist. He knew he was about to fight a battle he couldn’t win.    His men were low on water and rations and eventually ammunition… and there would be no reinforcements coming to his aid.   Kuribayashi threw out the notion of “banzai” face-on charges commonly used by the Japanese army and ordered his men to fight guerilla style to the last man standing.    Lt. General “Howlin’ Mad” Smith, the leader of the 3rd, 4th and 5th Marine Divisions, later confessed to war correspondents about General Kuribayashi, “I don’t know who he is, but the Japanese general running this show is one smart bastard.”  Fred Haynes, then a Captain on Iwo Jima was quoted, “The Japanese were not on Iwo Jima.  They were in it!  At great cost, you’d take a hill to then suddenly find the enemy at your flank or rear.”  The Marines employed grenades, flame-throwers and “Zippo” tanks as the weapons of choice to flush the Japanese out of the tunnels.   After five weeks of grueling battle, the Japanese forces were decimated, but at great cost to the Marines and other U.S. forces. Only 216 Japanese soldiers were captured, many committed suicide as the Japanese propaganda machine led their soldiers to believe that the Americans soldiers were savages.  Those who did surrender were surprised when they often received compassion by the Americans who offered them water, cigarettes, coffee and even the occasional libation.  At the end of the fighting, there were a several holdouts hiding in the labyrinth of caves.  Most eventually surrendered, but two soldiers dodged U.S forces for four years!  They finally surrendered in January of 1949.

SUMMARY:  Iwo Jima was one of the most ferocious and bloody battles of WWII and forever ingrained the legendary grit of the US Marine Corps on the American consciousness. During the remainder of the war, Iwo Jima was used primarily as a refueling and emergency landing strip for bombers in the Pacific. Ironically, the original intended purpose of taking Iwo Jima never really materialized.  It was to serve as a strategic staging area for the invasion of Japan, but that too never came to pass as the decision was made to drop atomic bombs in August 1945 on Hiroshima and Nagasaki.

The Medal of Honor, America’s highest military honor, was presented to 22 Marines (12 posthumously) and 5 to sailors, 4 who were Navy Corpsmen (2 of those were posthumous) during the battle of Iwo Jima.  There are approximately 1,200 Veterans of Iwo Jima alive today.

Overall, the WWII Veterans alive today are mostly in their early to mid 90’s.   These are the men and women of what has been dubbed “The Greatest Generation” and this writer agrees.  That is why I’m proud to be a part of American Veterans Aid.  AVA is an organization that helps veterans of WWII, Korea and Vietnam apply for a little-known V.A. pension called Aid & Attendance.  It is especially designed for veterans and their spouses who might need the help of another to perform daily living activities.  This pension offers special monthly compensation on a long-term basis.  The cost of this type of care is on the rise, but thanks to the folks at American Veterans Aid, application is easy.  Click here for more information.