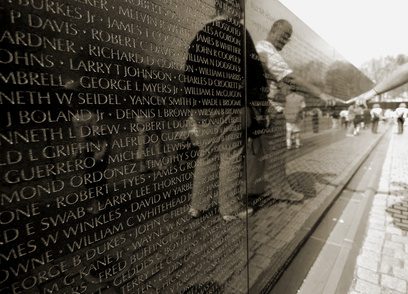 March 29 commemorates the sacrifices of Vietnam Veterans and their families. It is a day set aside to recognize the men and women who were denied a proper welcome upon returning home and is designated as National Vietnam Veterans Day.

On January 12, 1962, United States Army pilots lifted more than 1,000 South Vietnamese service members over jungle and underbrush to capture a National Liberation Front stronghold near Saigon. Operation Chopper marked America’s first combat mission against the Viet Cong, and the beginning of a long and challenging war. Through more than a decade of conflict that tested the fabric of our Nation, the service of our men and women in uniform stood true.

Our veterans answered our country’s call and served with honor, and on March 29, 1973, the last of our troops left Vietnam. Eleven years of combat left their imprint on a generation. In one of the war’s most profound tragedies, many of these men and women came home to be shunned or neglected – to face treatment unbefitting their courage and a welcome unworthy of their example.

In 2012, President Barack Obama proclaimed March 29 as Vietnam Veterans Day. He called upon all Americans to observe this day with appropriate programs, ceremonies, and activities that commemorated the 50 year anniversary of the Vietnam War.

Since then, every year there are nationwide events and commemorative activities to honor the Vets of Vietnam. On March 21st 2017, The Vietnam War Veterans Recognition Act of 2017 passed the House without amendment. The Bill S.305 includes National Vietnam War Veterans Day, March 29, among those days on which the flag should especially be displayed.

From: Uncategorized, Veterans Aid
← Veterans give tours on USS Iowa
Aid & Attendance – Reducing the Financial Burden of Long-term Care →
No comments yet